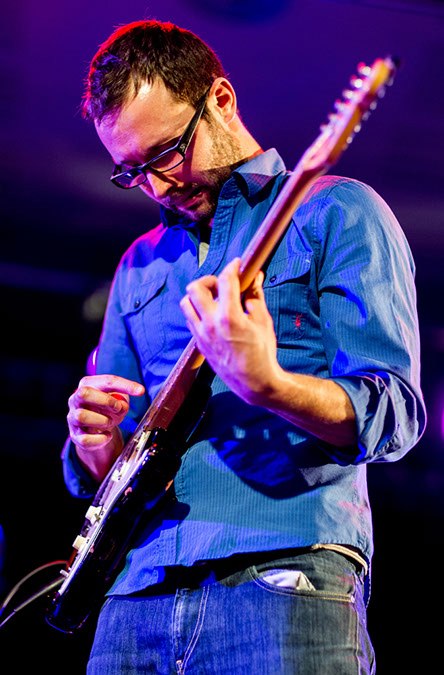 One of the most innovative guitarists and musicians to emerge from the UK in recent years, Chris Montague is widely recognised for his skills as a composer and performer. As a founder member of Troyka he has garnered a reputation for his distinctive approach to the guitar and has gained much acclaim for his contributions to many contemporary recordings.

Troyka’s second album ‘Moxxy’ was released on Edition records to glowing reviews in June 2012. This led to the band being named as one of the top ten live acts in London by Timeout magazine, alongside Hot Chip, The XX, Plan B and Micachu. In June 2012 Troyka were also featured on the front cover of Jazzwise magazine. November 2013 saw the release of Troyka’s 3rd album, a live big band album recorded at Cheltenham Jazz Festival and released on Impossible Ark Records.

As a composer Chris has received several commissions to write for different ensembles including the Royal Academy of Music Big Band, the Threads Orchestra and pieces for the 2013 EFG London Jazz Festival. Chris’ music has been the subject of a feature on BBC radio 3 and he is regularly included in many live broadcasts for various projects and radio stations. He has also recorded and performed with BBC Symphony Orchestra and BBC Scottish Symphony Orchestra.

Chris was selected to be involved with the Take 5 artist development scheme in 2013 and was made an associate member of the Royal Academy of Music (ARAM) in 2013, an award that recognises former students for their contribution to the music environment in which they have been active since graduating.

“He can be both mesmerisingly tender and stingingly explosive, drawing from contemporary jazz guitar heroes such as Bill Frisell as much as he does Wayne Krantz.” – Jazzwise